Studying alone is not enough: DAAD Award goes to ISM student from Vietnam 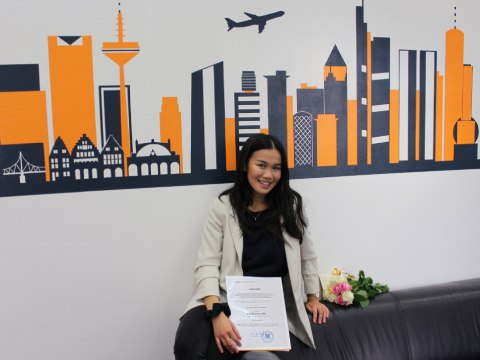 The DAAD Prize, endowed with 1,000 euros, is awarded each year to selected international students at German universities by the German Academic Exchange Service. This year's winner at ISM, Anh Dao Nguyen, impressed with her many talents in addition to her academic and social achievements. While studying at ISM, she put her baking skills to work for the ISM for Africa project and frequently volunteered for the Consulate General of Vietnam in Frankfurt.

Anh Dao feels “extremely grateful and honoured to have received it among all the other international students”. The 21-year-old successfully completed her Bachelor's degree in International Management at ISM this summer. What she particularly liked about her study abroad program at ISM Frankfurt was that she was able to broaden her horizons and meet many new people. Among other things, she took part in ISM's buddy programs and mentored freshmen and exchange students. Anh Dao is convinced that studying is about more than just good grades: “I think that you can gain a lot from charities or extracurricular activities and learn new skills, especially communication and interpersonal skills.” From her studies at ISM, on the other hand, she was able to bring her knowledge of marketing and finance to her charity work. “So, yes, I think that the two areas are both mutually beneficial to each other.” Her tip to her fellow international students: “Be open-minded and talk to people. I think the big advantage with ISM is that the classes are smaller and so you can not only connect better to your classmates, but also to your professors. So I think you should really seize the opportunity to build that relationship.”